Stress at school and home could be to blame for a growing number of young people seeking help for hair loss.

Get Your Free Consultation 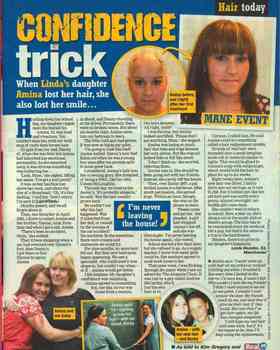 One clinic which treats baldness says it’s seeing up to 15 under-21s every month, three times the number looking for help since 2007.

Amina Denidni is 16 and her hair started to fall out four years ago. “It started with a small patch but got worse over six months,” she said. She was diagnosed with Alopecia.

The symptoms can range from patchy hair loss on your scalp, to losing all the hair on your body. Andrew McCarthy runs the Alopecia Clinic in Manchester and has seen people asking for help increase threefold in recent months.

He said: “Alopecia is caused by the body’s natural immune system wrongly attacking your hair follicles.”

Stress, depression and anxiety are the biggest triggers for alopecia. It’s a condition that is not fully understood. Some think genetics play a part.

Treatments are available but there’s no recognised cure that has been widely successful. Neil Shah, of the Stress Management Society, says poor diet and lack of exercise can play a part. After losing the hair on her scalp Amina lost all her confidence and refused to go to school. She wouldn’t leave the house, answer the door or see her friends.

She was also bullied by people outside of school.

“We were on the bus, Amina was wearing a hat and some boys on the bus shouted, ‘baldie’,” said her mum Lin. On another occasion a girl ripped off Amina’s hat exposing her head. She was so upset and traumatised she was fixed to the spot and her mother had to collect her and take her home.

For some sufferers hair does eventually regrow but there is no guarantee and no wonder cure.

It is real hair that is fixed to her scalp for several weeks at a time. It helps her lead a normal life, so she can take a shower, go swimming, shampoo and blow dry it like normal hair. It can also be styled, cut and coloured just how she likes it.

Since getting the treatment, Amina says she has managed to rebuild her life.

Her confidence has returned, she is back at school and talking about her experience to help others. She said: “I’m back to being normal again. Don’t give up hope. Things can get better.”